Yate firefighters raise over £1000 for charity with Christmas float 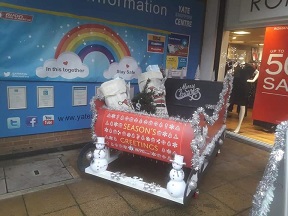 Firefighters from Yate Fire Station have raised £1016.96 after designing, decorating and displaying a Christmas float at Yate Shopping Centre during December and encouraging local shoppers to donate.

Donations collected by the firefighters who accompanied the Christmas float over the two days have been shared equally between The Firefighters Charity and NHS Charities.

Yate Fire Station’s Watch Manager A, Di Clack said: “After recently returning to Yate Fire Station in August this year, I soon discovered the Christmas float hadn’t been put out on display for the past two years at Yate Shopping Centre.  So I decided to round up a few of the firefighters based at Yate and together we completely rebuilt it.

“My colleagues and I are delighted by the money raised, especially in the short amount of time we had the float on display.  On behalf of the whole station, I would like to thank everyone involved in building the new float, as well as everyone who very kindly and generously donated.”

It is hoped that the firefighters from Yate Fire Station will continue to support this Christmas tradition each year, raising funds for those charities who need it most, more this year than ever before.

If you were unable to see the new Christmas float and donate in person, there’s still an opportunity to support the charities:

For the Firefighters Charity visit www.justgiving.com/fundraising/afrs03christmasfloat

For The NHS Charities visit www.justgiving.com/fundraising/afrs03yatechristmasfloat