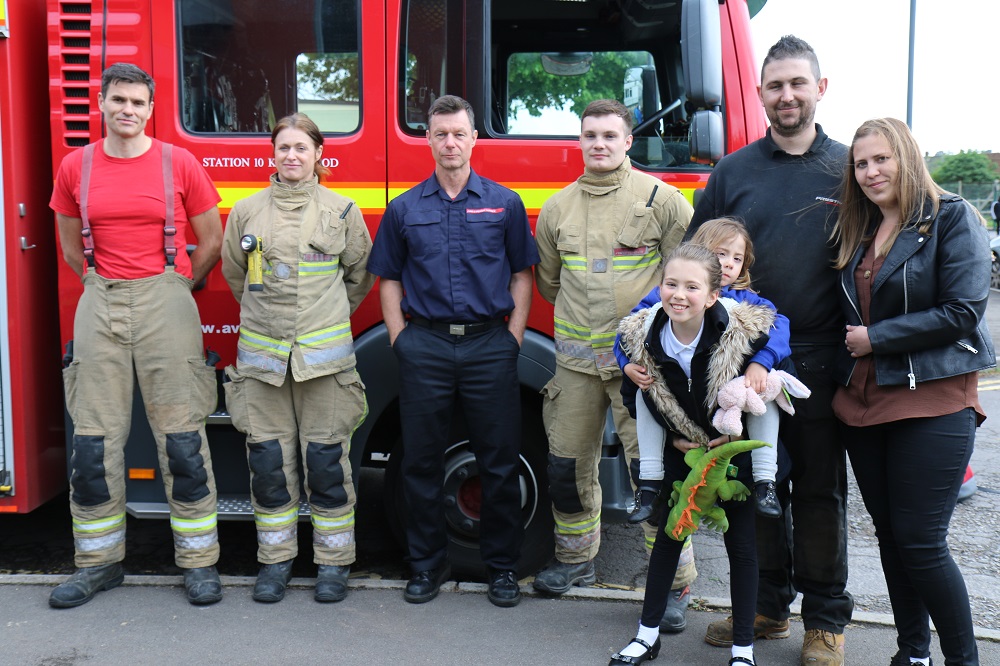 Firefigthers from Avon Fire & Rescue Service (AF&RS) visited a nine-year-old girl at school to thank her for her assistance at an incident.

Quick thinking Shaylee Stone called the Service after her disabled mum became trapped under a wardrobe during the Easter holidays.

She was able to tell control operators her address on Oaktree Avenue in Pucklechurch, what the problem was and opened the back door prior to the arrival of firefighters.

Shaylee’s swift actions ensured that her mum was freed as quickly as possible with only minor injuries.

Andrew Chapple, White Watch Crew Manager at Kingswood fire station, who attended the incident, said: “Shayleigh really is an incredible little girl and her quick thinking meant we were able to easily locate the incident and rescue her mum who was stuck.

“It just goes to show the importance of children knowing the address of where they live and what they do in an emergency.

“Shaylee is particularly brave little girl and it was only right that we visited her at school to say thank you and help to educate the other children on what to do in an emergency.”

One crew from Kingswood fire station attended the incident following the call at 10:04 on the 11th April.

On arrival, they found mum Sophie trapped under a wardrobe in a bedroom. It took three firefighters to get the wardrobe off as it was digging into her rib and causing pain whenever it moved.

Ambulance crews were also in attendance and assessed Sophie’s condition after she complained of chest and abdominal pains. She visited hospital later that evening but had no serious injuries.

Mum Sophie Stone said: “Shaylee did absolutely amazingly. She has always known her address but for her to do what she did, was amazing.

“I am so proud of her. She kept her sister calm as well which was brilliant. Shayleigh got her back in the house and calmed her down.

“I don’t know how she did it at all. I certainly wouldn’t have been able to do that at her age.

“It would have been a lot worse if she hadn’t been there. I couldn’t move. Shayleigh handled it so well.”

In case of an emergency, make sure your children know: