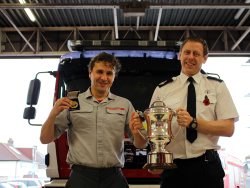 An Avon Fire & Rescue Service (AF&RS) Firefighter has been presented with a prestigious award for sporting excellence.

On Thursday 5 November Firefighter Rob Atkin, who is based at Patchway Fire Station, was presented with the Peter and Eve Carr Memorial Trophy by Assistant Chief Fire Officer Rob Davis.

The national award was established in 1995 by Fire Sport UK to acknowledge Peter and Eve Carr’s contribution to fire services athletics.

Firefighter Atkin has won the Fire Service Marathon Championship, which is part of the Snowdonia Marathon, for the last four years.

It’s the first time that a member of staff from AF&RS has received the award.

In a letter, Eddie Gutteridge, the honorary president of the Fire Sport UK, writes: “Awarded to Rob Atkin for 2015 for winning the Fire Service Marathon Championship held within the Snowdonia Marathon on four consecutive occasions. No fire service athlete has achieved this distinction in the history of our championship. The Snowdonia Marathon at Llanberis is considered the toughest in the UK. A worthy winner for such an enduring performance.”

Assistant Chief Fire Officer, Rob Davis, said: “I am extremely proud to be presenting this award on behalf of the Fire Sport UK. Rob has always taken a keen interest in athletics and staying fit, taking part in a number of sporting events over the years.

“To be recognised for competing in an extremely difficult event, not just once but four times, is a huge honour.

“AF&RS prides itself on the health and fitness of its operational staff and we do all we can to support those taking part in events outside of their working hours.”