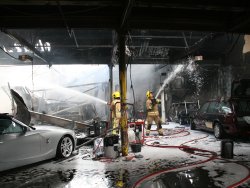 A severe fire in a car workshop has been dealt with by firefighters.

When crews arrived they found the premises well-alight.

It’s thought the fire started accidentally after a fault with an extractor fan in a spray painting booth.

Fortunately, no one was hurt but the premise was left badly damaged along with four cars which were inside at the time.