Smoke alarm to thank for rescue 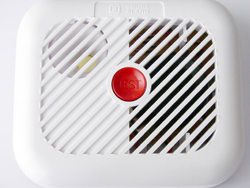 A smoke alarm was responsible for the rescue of a woman from her smoke filled home by firefighters.

Crews were called after a neighbour heard the alarm sounding and could smell smoke from the next door property.

A fire engine from Southmead and one from Patchway were called to house and firefighters immediately began an investigation into the cause of the alarm. After firefighters spotted smoke in the ground floor kitchen, crews in breathing apparatus broke into the property.

The smoke had been caused by a pan which had been left on a hob, causing the smoke alarm to activate.

During a full search of the property crews found a woman in her 60s asleep in an upstairs room, with the doors closed. She was woken and led to safety by the firefighters. Once outside she was treated by paramedics for the effects of smoke inhalation before being taken to hospital as a precaution.

The incident demonstrates the lifesaving impact working smoke alarms can have. By alerting the neighbour to the incident more serious damage and injury were certainly avoided.

For more information about how you can protect your home with a smoke alarm click here or request a Home Fire Safety Visit here.