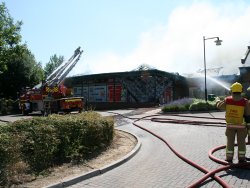 More than 40 firefighters have been involved in a blaze at a takeaway outlet in Stoke Gifford.

The alarm was raised shortly after 11.00hrs, and Avon Fire & Rescue Service received more than 20 calls about the incident.

Some witnesses reported seeing flames reaching some 60 feet into the air.

Crews arrived at Simmonds View where they found a well-developed fire in the roof space of a building used as a Chinese takeaway within a terraced block. 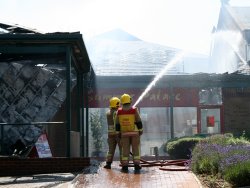 There are no reports of anyone being injured as a result of the fire, which soon spread to a neighbouring newsagent store.

Both premises have been badly damaged.

Two firefighters wearing breathing apparatus have been deployed. Four jets and one high pressure hosereel were used to fight the fire.

Two aerial appliances are also at the scene, and thermal imaging cameras are being used to identify any other areas which require attention.

Adjacent properties are being checked as a precaution.

The fire is believed to have started accidentally.