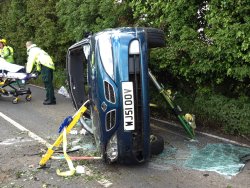 Three people were rescued by firefighters after an RTC in which their vehicle ended up on its side.

After stabilising the vehicle, crews used hydraulic cutting equipment to access the casualties.

A man in his 40s was taken to hospital by air ambulance and two other people, a male in his 20s and a female in her 30s, were treated at the scene.