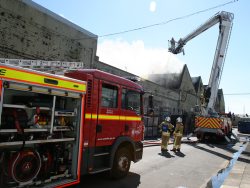 Firefighters have tackled a large fire at an industrial in South Gloucestershire.

Crews were called initially to reports that smoke was coming from one of the units on the industrial estate. Once on scene the first attending crews were faced with a well developed fire and requested additional support.

At the height of the incident six fire engines were at the scene, as well as an aerial appliance and a command unit. Eight firefighters in breathing apparatus tackled the blaze using jets and hose reels. Fire crews also made use of the aerial appliance to deliver water from above.

Crews brought the blaze under control by the early afternoon, however the fire caused extensive damage to the premises which measured roughly 20 metres by 10 metres.

The cause of the fire is being looked into by fire investigation officers.