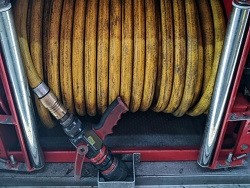 Crews from Thornbury and Patchway were called to reports of a shed fire at 10:17.

On arrival crews found a fire in a large out building used as commercial premises.

Also in use were thermal imaging camera and gas monitors to check that the scene was safe.

There were no casualties and the cause of the incident was thought to have been accidental ignition.