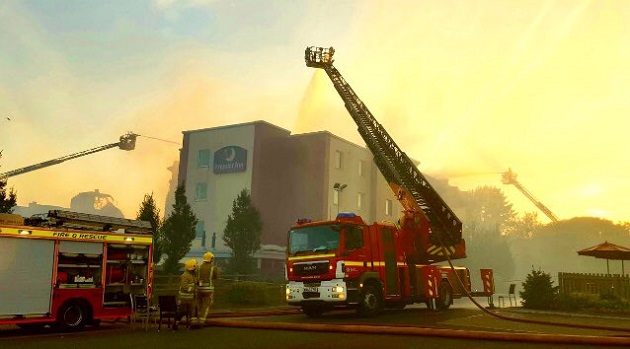 At 13.27 on the 17th July, crews from across the Service area were called to a fire in the Premier Inn hotel.

On arrival, crews found a fire on the third floor of the property and committed firefighters to extinguish the fire.

Due to the structural stability of the building and extensive spread of fire, firefighters were withdrawn from the property for their own safety but continued to fight the fire from outside of the property using turntable ladders and water monitors.

They also used specialist equipment such as the High Volume Pump and Hose Layer to ensure an adequate water supply was delivered to the scene.

At its height, there were around 70 firefighters on scene alongside officers and multi-agency response.

Throughout the length of the incident, there was substantial collapse of the building onto the A4108 between Clifton Rugby Club and Lysander Road. Due to this, the road was closed and will remain closed as clean-up is completed to ensure safety for the community.

All guests staying at the hotel were accounted for thanks to the Police and Premier Inn.

There were also some concerns over the cladding. This was non-combustible Rockwool cladding that contained no ACM and in no way impacted on the spread of fire or crew’s response to the incident.

The fire was extinguished as of 8.40am on Friday. The cause is currently unknown and fire investigation is on-going.

Multi-agency meetings will continue throughout Friday to ensure the building is safe, for clean-up to take place and for the local area to return to normality.

Avon Fire and Rescue Service would like to thank Police, Ambulance, Bristol Water, Wessex Water, Highways England, Environment Agency, Premier Inn and the Met Office for their support throughout the incident.