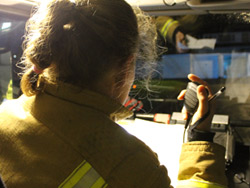 Crews from seven fire engines have dealt with a fire involving a large quantity of tyres.

The Service was alerted to the blaze involving around 150 tyres at a farm close to the M5 motorway. Smoke was visible from the road as well as the nearby Michaelwood Services.

The blaze is also affected a building on at the site. There were no reports of any injuries and the fire is believed to have started accidentally.