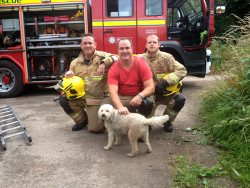 A dog which had become trapped in a rhyne during a walk was rescued by firefighters.

Crews from Thornbury and Bedminster were called after the pet was unable to climb out of the watercourse. With the animal’s elderly owner unable to reach it, firefighters used a ladder to rescue the dog.

Once freed it was safely reunited with its grateful owner.