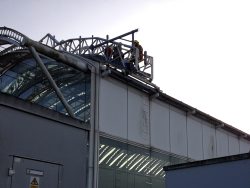 Two workers were rescued by firefighters after the gantry they were in got stuck on the roof of a shopping centre.

When crews arrived on scene they found the two males unable to get down. It appears they had been working on the roof in the gantry which was approximately 15 metres up when it became stuck.

Crews set up a safe working at height system and two firefighters climbed up to the men, who were in their 30s. They were then assisted to safety and unhurt.