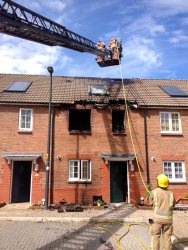 A fire has caused extensive damage to a terraced property in Stoke Gifford.

Crews were sent to the scene and found a well-developed fire on the first floor. The occupant of the house, a lady aged in her 20s was already outside when firefighters arrived, although a pet dog was still in the home.

Firefighters in breathing apparatus entered the house and used a high pressure hose reel to tackle the fire. They were able to rescue the dog from a ground floor kitchen before bringing it to safety, uninjured.

Crews used water jets and hose reels to bring the fire under control. A turntable ladder was also brought in to tackle the fire from above. Their actions were successful in preventing the fire from spreading to neighbouring properties in the terrace.

Extensive fire damage was caused to the roof and first floor of the house. Water and smoke damaged the ground floor.

The cause of the fire is currently under investigation.