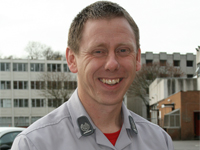 Rob joined Somerset Fire Brigade in 1991 and shortly after this transferred to the County of Avon Fire Brigade as a firefighter at Bath Fire Station.

After serving as a Firefighter for seven years Rob was promoted to a junior officer serving at a number of stations and departments, including Technical Fire Safety, Brislington and Southmead fire stations.

Following the terrorist attacks on America on September 11 2001, Rob was seconded to a Government project to run the New Dimension program for five years. Rob has since served in training, unitary and station management and as Head of Operational Response.

Rob gained a Masters Degree in 2011 in Disaster Management and is a graduate of the Institution of Fire Engineers.