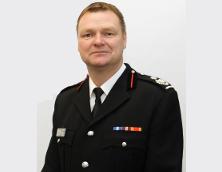 Mick Crennell was appointed the Chief Fire Officer and Chief Executive in September 2018 although he took up his position in August 2017 on an interim basis. In his 27 years’ service Mick has served at all ranks and in a wide and diverse range of roles within three different Fire and Rescue Services. He joined Hampshire Fire and Rescue service as a Firefighter back in 1992 gaining promotion through all of the different uniformed levels to his current position.

Academically, Mick has successfully achieved a Certificate in Management Studies (CMS), Diploma in Management Studies (DMS) and a Master’s Degree in Business Administration (MBA), graduating from Portsmouth University. He has also completed the Fire Service Executive Leadership Programme (ELP) with Warwick University Business School. Mick is also a Graduate of the Institution of Fire Engineers. He is participating on the NFCC National Leadership Centre programme,

A family man, married since 1998 to his wife Lindsay, with two grown up sons, Mick also likes to keep himself fit and active and his hobbies and interests include golf, walking and cycling. In October 2015, Mick undertook a trek to the Himalayas where he challenged himself by trekking to Everest Base Camp and summiting on Island Peak for the Firefighters Charity.