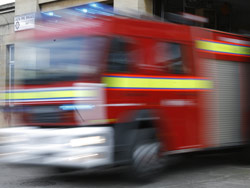 Avon Fire & Rescue Service (AF&RS) has welcomed the outcome of a court case in which a Bristol businessman was successfully prosecuted for failing to comply with the Regulatory Reform (Fire Safety) Order 2005.

Garreth Wilson, who is the person responsible for student accommodation at 5 Nine Tree Hill, Cotham, Bristol, pleaded guilty to three charges relating to breaches in fire safety at the property. The charges were:

In June 2014 Wilson was given a four month custodial sentence, suspended for 12 months, and ordered to pay costs for similar fire safety breaches. These followed a fire in January 2012 where two women had to be rescued from the roof of the property by firefighters.

Today’s sentence included three months for each of the charges, which will run concurrently, and a further three month sentence, to run consecutively, for breaching the previous suspended sentence.

On sentencing HHJ Picton said: “Parents paying rent expect an appropriate level of care. Fire safety measures, you’ve got to do it, there’s no excuse.”

Head of Technical Fire Safety for AF&RS, Group Manager Matt Peskett, said: “We are satisfied with the outcome of this case and that the sentence reflects the severity of the charges.

“As the responsible person for the property Mr Wilson had a duty to ensure the safety of those living in the accommodation. Without adequate fire safety measures lives were put at risk.

“Part of the role of the fire and rescue service is to enforce the Regulatory Reform (Fire Safety) Order 2005 and ensure all business premises and public places comply so people are safe when inside.

“Landlords should be aware that where they provide accommodation they have a duty of care and a moral responsibility to look after their guests and residents. They should carry out a risk assessment and ensure their premises are up to the appropriate standard.

“Failure to do so can result in loss of life and where this comes to our attention, whether there is a fire or not, this may result in prosecution.

“We would like to remind all businesses that they have a duty to comply with fire safety legislation and I hope this case will show just how serious we take our responsibilities to protect the lives of people in our community.”

The Regulatory Reform (Fire Safety) Order 2005 applies to all non-domestic premises in England and Wales. A responsible person must carry out a fire risk assessment and implement and maintain a fire management plan.

From October 2015 new legislation is due to be introduced. This will require all private sector landlords to install smoke alarms on each storey of their property and ensure they are working at the start of a tenancy. There will also be a requirement to install carbon monoxide alarms in properties burning solid fuel.

Ahead of the new legislation, AF&RS is handing out free smoke alarms at events at fire stations across the area over the next few months. Details are available at http://www.avonfire.gov.uk/business-safety/fire-safety-for-landlords

AF&RS works closely with businesses to ensure they comply with the regulations and staff are available to offer practical advice and assistance in this area.