History of the fire service

Firefighting can be traced back to Roman times when slaves were given the task of tackling blazes. Known as Familica Publica they were stationed around the walls and gates of towns and cities.

In the Middle Ages the job became less structured with the able-bodied people in the community turning out to fight fires with buckets and other simple firefighting equipment. Water would be collected from the nearest pond or stream and brought to the fire by passing buckets along a human chain.

Following the Great Fire of London in 1666, insurance companies got in on the act and provided their own fire cover for businesses they had insured. Insured premises were issued with a plaque, known as a fire mark, to display outside the building. This would indicate which insurance company would use its resources if a fire started in the building.

However this privatisation of the service meant that it was not uncommon for more than one brigade to show up at an incident – and if the fire mark did not belong to those first on the scene, the building would be left to burn until the relevant brigade arrived.

This continued until the 19th Century, when towns and cities (and in some cases, villages) formed their own fire brigades. Each brigade was very small, and large fires would require several services to attend.

The inefficiency of this system was exposed during World War Two when these small brigades found they could not cope with the many large fires started by enemy bombing. As a result, the individual brigades were merged into one for the duration of the war, forming the National Fire Service. 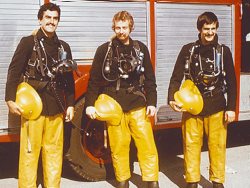 After the war, the provision of fire cover for the local population became the responsibility of local authorities (such as city and district councils). For many years firefighting in our area came under the remit of the County of Avon, and the fire service was known as Avon Fire Brigade.

To better reflect the changing role of fire brigades, the Fire and Rescue Services Act was passed in 2004, leading Avon to change its name to Avon Fire & Rescue Service (AF&RS).