Firefighters in training for fund-raising run 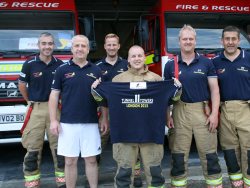 Six firefighters from Portishead Fire Station are in training for a fund-raising run in London next month.

They have been blazing a trail around the streets of the North Somerset town for the past four months in preparation for their trip to the capital on Sunday 21 July.

The event is the second annual London Tunnel2Towers 5Km run/walk, which has been inspired by a similar event in New York in memory of the 9/11 terrorist attacks.

They are all Retained Duty System staff, who have a variety of other jobs between them.

Just to ensure the challenge is a little bit more demanding, they are going to complete the run in their full fire kit.

Team leader Daren Beacham said: “We thought it would be a good challenge, for a very worthy cause.

“Local people have probably wondered what has been going on these past few Tuesday evenings, seeing the fire crew set off for a run around the town.

“It’s not a case of cutbacks meaning that we are running to jobs rather than use the fire engine – we are all in training for the charity run.”

None of the six were regular runners until they decided to start training for the event, and not all of them are sure they are going to carry on running afterwards.

But they are all committed to completing the challenge and raising as much money as they can for the charity.

The run starts at Southwark Park, and goes through the Rotherhithe Tunnel, under the River Thames, to the Towers of Canary Wharf and the finish line at Billingsgate Market.