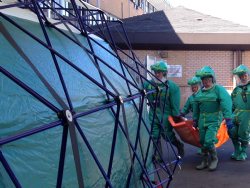 Codenamed ‘Medicinal Compound’ the exercise which took place on Monday 27 April was one of the largest the hospital has taken part in.

The exercise is part of normal preparedness that public organisations have to undertake as part of their statutory duty.

Both Avon Fire & Rescue Service and the hospitals’ Emergency Department worked in decontamination tents on the hospital grounds.

They dealt with ‘live casualties’ (volunteers) of the chemical incident with fire engines stationed outside the hospital. Alongside this, an incident control room was set up in the hospital running in real time as events unfold.

On site at Weston General Hospital were:

“While nobody wants a major incident, it’s essential that hospital and emergency services are able to plan and prepare for a high level response if the worst was to happen.

“We’re pleased to give Avon Fire & Rescue the facilities in the hospital to run this training and put our own Emergency Department through the extreme pressures of the situation. I’m looking forward to testing our reactions and responses to a major crisis in a safe and controlled environment – including my own! 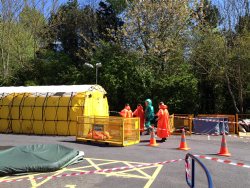 “Despite this being a major operation, the hospital will run as normal and will not be affected. The exercise is being run on grounds at the back of the hospital, away from the front entrance.

“We’re expecting fire engines outside the hospital on the main road so we would like to apologise if there is any inconvenience caused and also reassure people not to be alarmed by anything they may see on the day.”

Avon Fire & Rescue Service Station Manager Jon Brown said: “This exercise provides us with a good opportunity to work closely with the other agencies which may be involved in an incident of this nature.

“The scenario involves a number of people exposed to a chemical which will cause varying degrees of injury. We will be practicing our protocols and procedures for responding to a major incident involving an unknown substance.

“We will also be testing the equipment we use to decontaminate large numbers of people and working alongside the Weston General Hospital to ensure that in the event of a real incident of this nature in the local area we are can respond quickly and effectively.”