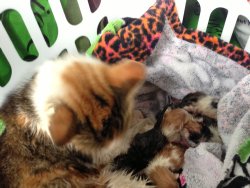 A cat and her six newborn kittens have been rescued by firefighters from the engine compartment of a van.

When crews arrived they found the animal inside the engine of a Volkswagen van with six kittens, who were just minutes old.

It’s thought the cat had climbed into the engine compartment to give birth and had been there for around an hour.

Using small cutting equipment firefighters removed the engine cover. The animals were then lowered into a basket and placed in a nearby stable to recover from their ordeal.

They appeared to be unharmed.