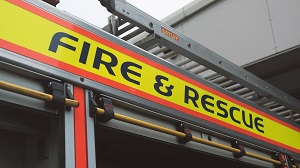 Crews from Weston-Super-Mare were called to reports of a road traffic collision at 20:49.

On arrival, firefighters found a collision involving one vehicle which had left the carriageway.

One casualty was able to self rescue prior to the arrival of crews and a further casualty remained inside the vehicle.

Firefighters assisted the casualty from the vehicle with small tools in use to make the vehicle safe.

Both casualties were left in the hands of ambulance colleagues as they were conveyed to hospital.

Police and Highways Agency colleagues were also in attendance.