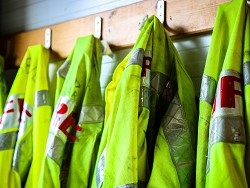 We were called to reports of a fire affecting a building at 15:32.

Eight fire appliances, one turntable ladder, one command unit, one welfare unit, the drone team, one high volume pump and a hose layer were used to extinguish the blaze.

No persons were injured during the fire, and those residents evacuated during the height of the incident have now been returned to their homes.

After thorough fire inspection, the cause of the fire has been determined accidental.

No hotspots were found and the scene was left in the hands of the owner.