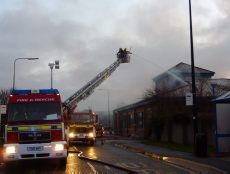 Crews were called to the premises and on arrival found the roof void well alight.

Firefighters are tackling a well developed blaze at a supermarket on the edge of Weston-super-Mare.

At the height of the fire eight pumps and two aerial appliances were in attendance, with water being put on to the flames from the ground and above the supermarket.

Two industrial propane cylinders are thought to be involved in the fire and crews are currently using water to cool them. 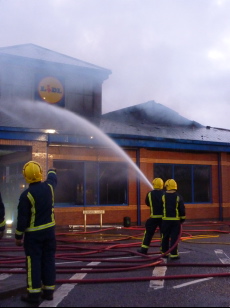 Around 20 residents have been evacuated from their homes in nearby Thorn Close, Worle, as a precaution. They are currently staying with friends and family or at a nearby supermarket.

Summer Lane is closed from Bransbury Way, New Bristol Road is closed between Moor Lane and the Homebase roundabout and Worle High Street is also closed.

Trains are currently running through to Weston-super-Mare station, but not stopping at Worle station.

An investigation into the cause of the fire is expected to get underway later.