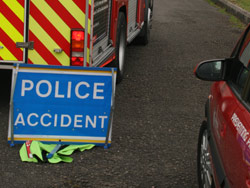 Crews from Avonmouth and Pill were called by police to a road traffic collision involving four vehicles on the M5 Southbound, Junction 19 on the afternoon of 23rd December 2018.

On arrival all involved had been removed from the vehicles and two casualties were being treated by ambulance colleagues.

Fire fighters then worked to make the vehicles safe.

As well as police and ambulance, Highways were also in attendance.