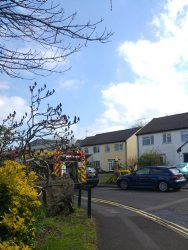 Five fire engines and a turntable ladder were called in to deal with a fire involving two houses.

Crews from Nailsea, Clevedon, Bedminster, Temple and Portishead were alerted after a number of calls were received from the public reporting a fire.

Once on scene firefighters were faced with a fire affecting the roof of two semi-detached houses. Crews in breathing apparatus used high pressure hose reels and jets to bring the fire under control.

There was no-one inside either properties when crews arrived and there were no injuries reported.

The Red Cross Emergency Response team also attended to provide support to those affected by the fire.

The cause of the fire will be investigated.