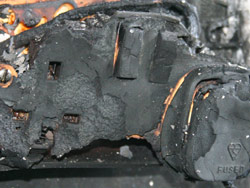 Fire crews have tackled a blaze which is believed to have started in an electrical extension lead.

Three fire engines from Nailsea and Clevedon were alerted after the occupants of the house noticed smoke and flames.

Three people all made their way to safety and were outside when firefighters arrived. Two firefighters in breathing apparatus used a high pressure hose reel and CO2 extinguisher to the bring the fire under control. It caused damage to the kitchen, where is started, as well as smoke damage elsewhere in the house.

One man in his 20s was treated at the scene for the effects of smoke inhalation.

It’s thought the fire was started accidentally by a multi-gang extension that was in use at the time.

Electrical faults are one of the main causes of fires in our area, but many could have been avoided. They are often caused by the overloading of extension cables, resulting in dangerous consequences.

Click here to use a free app which will help you to check that your sockets are not overloaded.