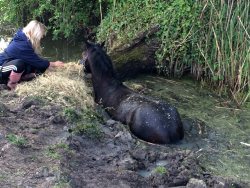 A four year-old pony was rescued by firefighters after getting stuck in a water–filled ditch.

On arrival crews found the animal unable to get out of the ditch as the water was up to the top of its legs.

Firefighters trained in animal and water rescue worked alongside a vet to assist the animal to safety once it had been sedated.

It appeared to be unharmed. 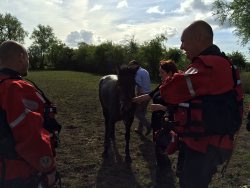