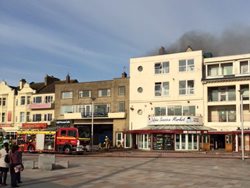 Firefighters have remained on the scene of the incident overnight and will continue to be there this morning.

All persons have now been accounted for and no rescues were carried out by Avon Fire & Rescue Service. Two people were taken to hospital suffering from smoke inhalation.

At the height of the fire more than 50 firefighters were on scene dealing with the blaze which was fully extinguished by 22.50hrs on Tuesday. Crews have been on scene all night damping down and checking for hotspots.

An investigation into the cause of the fire is now underway and is expected to continue today.

Firefighters are expected to remain on the scene of the fire for much of the night.

The fire is now under control. However, small pockets of fire remain in the roof area, so water is still being projected on to these.

Crews are currently assessing the safety of the building before committing anyone inside to search the premises.

An investigation into the cause of the fire is underway and is expected to continue tomorrow.

Firefighters remain on the scene of the incident. The fire is affecting a building with a commercial premise on the ground floor and flats above.

Crews are currently conducting a thorough search of the building to determine if anyone is inside.

The seafront is still open but there is congestion in the area and a cordon is in place. 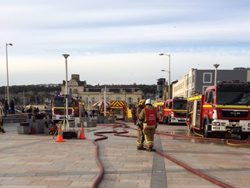 Firefighters are on scene dealing with a severe fire in a building.

On arrival crews found the well-developed fire affecting the second and third floors of the building.