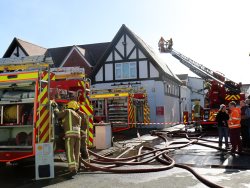 Around 50 firefighters dealt with a blaze affecting a die cast furnace and workshop in the Milton area of Weston-super-Mare.

The fire was affecting eight neighbouring flats, with all residents safely evacuated. However, a woman in her 30s was taken to hospital suffering from smoke inhalation.

At the height of the fire eight fire engines, a turntable ladder and a number of supporting vehicles were on the scene.

The fire affected the roof of the small industrial unit causing significant damage. The neighbouring flats were affected by smoke and water.

The Red Cross Fire and Emergency Support Service (FESS) was also in attendance to assist the residents affected by the fire.