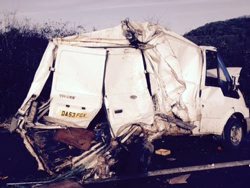 A road traffic collision involving a car, a van and an oil tanker which resulted in a large quantity of diesel spilling on to the motorway, was dealt with by firefighters.

Fortunately the four people involved in the incident were not trapped in their vehicles. They were treated at the scene by paramedics and one female was taken to hospital.

Approximately 200 litres of diesel from the oil tanker’s own fuel tank spilt on to the carriageway.

Using a high pressure hose reel, an environmental pack and absorbent granules firefighters were able to remove the diesel from the road.

The incident was then left in the hands of the Highways Agency and police.