Horse and rider rescued by firefighters 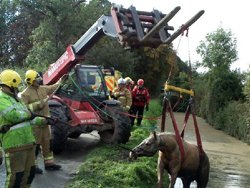 Firefighters have rescued a horse and its rider after they fell into a water-filled rhyne.

When crews arrived on scene they found a woman in her 20s at the side of the rhyne. She had been assisted to safety by a passer-by. She was suffering from suspected shoulder and neck injuries, so was taken to hospital by ambulance crews.

The animal rescue team from Bath Fire Station were called to the incident with their specialist equipment for rescuing animals.

Using lines and a harness which they attached to ‘Nico’ the horse, firefighters worked alongside a vet, who sedated the animal.

The lines were then attached to a forklift vehicle which had been lent to the team by a local farmer. The horse was then lifted to safety.

Nico appeared to be unharmed.