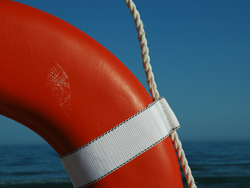 Firefighters from Avon Fire & Rescue Service have used a training exercise to highlight the dangers of drinking alcohol near to the water.

On Saturday 2 June, crews from Bedminster Fire Station carried out a water rescue demonstration on the waterfront near to The Arnolfini in Bristol Harbourside. A ‘casualty’ was rescued from the water by firefighters using swift water rescue equipment and a safety boat.

During the exercise firefighters spoke to people enjoying the docks during the Bank Holiday weekend to ‘make sure river water is not your last drink.’

“We want people to be able to enjoy the waterfront safely. Rivers, canals and open water can present a real danger if you’ve had a drink. The water can be extremely cold, and added to the effects of alcohol, can dramatically affect the reactions of even the strongest swimmer.

“We’re urging visitors and residents of Bristol to take care near the water and also think carefully about how they are getting home at the end of the night. If their walk home takes them past water could they think about an alternative route, getting a taxi, drinking less alcohol or having a glass of water between each drink to help keep their wits about them?”

Between April 2011 and March 2012 Avon Fire & Rescue Service was called to 25 incidents involving a person in or at risk of entering the water – on average two a month.