With work having begun in 2020, the two and half year long redevelopment of Avon Fire & Rescue Service’s (AF&RS) Avonmouth Fire Station was completed this month. 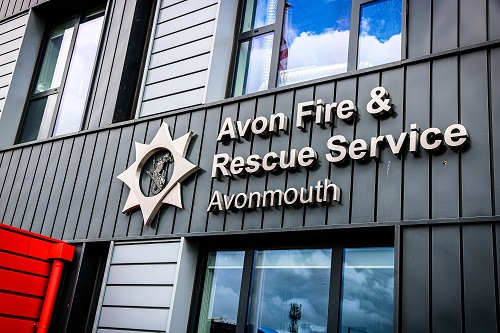 With work having begun in 2020, the two and half year long redevelopment of Avon Fire & Rescue Service’s (AF&RS) Avonmouth Fire Station was completed this month.

Soon after work began, the redevelopment project faced a national lockdown, putting barriers in the way of progress. However, despite working with restrictions in place, Knights Brown alongside the Major Project Manager from AF&RS Property Services Team managed to keep the project going, resulting in the project’s completion in August of this year.

The pre-existing station at the site on St Andrews Road, Avonmouth had stood proudly for over 60 years, with AF&RS having had a presence in the area 24/7 since then. Given the extensive history of the Service in the area, and the high volume of incidents attended by the crew, it was imperative that any redevelopment was done to a high standard.

Area Manager Vaughan Jenkins said: “I’d like to thank the crews and staff from Avonmouth fire station, which remained fully operational throughout the building process, as well as the local community for their support with this project.

“Firefighters and Service staff have even been involved in commissioning a custom piece of artwork for the space, and it’s been wonderful to see the real team effort that this project inspired.

“It’s really important to us that our fire stations are centred within the heart of the community, where local people need us to be and where we can respond quickly and effectively to local risk.”

Knights Brown is an independent, multidisciplinary, construction company, who, after an extensive procurement process, secured the contract for the redevelopment of Avonmouth Fire Station.

Mike Crook, Divisional Director from Knights Brown said: “We’re very proud to have delivered this state of the art fire station for AF&RS, ultimately enabling delivery of the high quality service demanded of the fire crews. It’s been our privilege to work alongside them during the course of the redevelopment and we wish them well in their new home.”

With work beginning in January 2020, the project progressed in two stages. The first stage marked, the construction of a new accommodation block and a single appliance which allowed fire crews to move out of the existing building. Next, the remainder of the old building was demolished and a further four appliance bays were constructed to bring the site to completion.

With Avonmouth being the fourth station designed by architects AHR for AF&RS, Director Karle Burford said: “This was a fantastic project for us to work on, continuing our longstanding relationship with AF&RS and to be able to redevelop and retain their place on an existing site of such local importance. The design brings modern and additional facilities to the station, helping the AF&RS team run more efficiently and improving response times for the local community.”

Now finished, the fire station will be formally opened by members of Avon Fire Authority at a later date in an official opening ceremony. In the meantime, staff from all around the Service, and Avonmouth firefighters are enjoying using the new, high quality site.