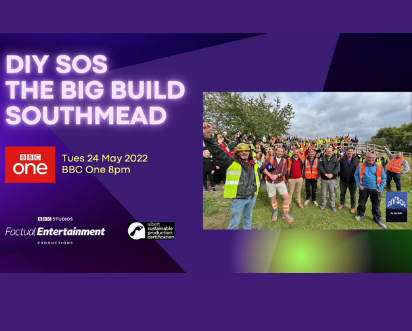 The heartwarming and, often, life-changing show which has ran for over 20 years, has transformed spaces of those in need for decades, and this time the team were in town to help to rebuild Southmeads much loved Adventure Playground, after it fell victim to vandalism last year, and was deemed unfit for purpose. Despite firefighters from AF&RS’s best efforts to extinguish the fire, it was already too late, leading to the community facility being out of action ever since.

Seeing first-hand the devastation the fire caused to the playground, firefighters from Southmead fire station were keen to get involved in the project, helping to restore the facility back to its former glory, becoming the much-loved community area it once was.

Throughout the rebuild, firefighters from Green Watch and Red Watch Southmead spent several days on site working alongside other volunteers ranging from the army to local tradespeople who all generously gave up their time and skills for the community project. From laying track mats on day one, to filling the playgrounds pond, to cleaning the roads, the involvement of the Services firefighters was very much appreciated by all those involved, with their efforts helping to push the project to completion.

In total the project took a total of 10 days to rebuild thanks to the extraordinary efforts shown by the army of volunteers, with a grand reveal event hosted for those who volunteered their time on Thursday 28 October alongside TV crews and Presenter Nick Knowles. Due to air on BBC One on Tuesday 24 May the show focuses on just how much the playground meant to the community of Southmead, and just how missed it was following the vandalism, while following its restoration journey.

Southmead Station Manager Adrian Davies said: “Being based in the heart of our local community, our crews understood just how important the playground was to the people of Southmead before it fell victim to vandalism, and were keen to get involved in the project helping to restore it to its former glory.

“I am incredibly proud of the efforts shown throughout the project by our firefighting crews who spent various days on site working tirelessly, and worked alongside other volunteers who gave up their time, skills and donated materials to reinvigorate the playground to its former glory. It really felt like the community came together to do something incredible.

“As a Fire & Rescue Service not only is it our duty to keep our Service strong and our communities safe, but it’s also in our nature to help our communities be the best they can be. Projects like this are rare, but are a reminder of just how remarkable things can happen when our communities come together to do something simply magnificent. We cannot wait to see the much-loved playground being used, and loved as it once was.”

You can watch the full episode on BBC on Tuesday 24 May at 8pm.