A team of firefighters from Avon Fire & Rescue Service (AF&RS) is celebrating after finishing third in a national competition designed to test their skills during a road traffic collision. 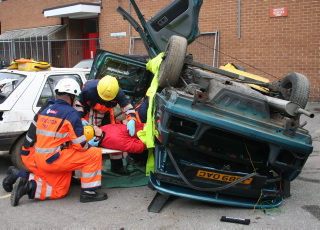 Six firefighters from Blue Watch at Temple Fire Station, in the centre of Bristol, competed against 45 other teams from fire and rescue services across the country in the UK Rescue Organisation (UKRO) Extrication Challenge.

The Avon team were first to demonstrate their skills in front of judges from the UKRO and faced a scenario involving two vehicles with one casualty trapped inside. The team had 20 minutes to remove the casualty from the vehicle with judges scrutinising their casualty care, medical, technical and incident command skills.

On the second day of the competition the 20 teams, including Avon, faced a complex scenario involving a road traffic collision with two casualties, one with serious injuries.

Following another great performance the team were delighted to learn that they had finished in joint third place with the team from Central Scotland Fire & Rescue Service. 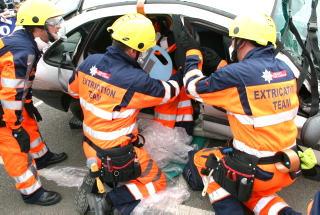 Avon Fire & Rescue Service Station Manager at Temple Fire Station, Tony Jackson, said: “This competition is designed to really test the skills of fire crews who deal with road traffic collisions, so members of the public can take comfort from the results of the competition knowing our crews are among the best in the country.

“We are often first on the scene to witness the devastating consequences of a road traffic collision, so it is vital our crews have the skills and knowledge to deal with these types of incidents.

“Being involved in this competition has allowed the crews to develop their skills, learn new techniques and procedures from colleagues in other fire and rescue services and share best practice.”

Two teams from AF&RS also entered the UKRO Trauma Care Challenge, where they were judged on their casualty care skills. The team from Red Watch Bedminster finished in 7th place and the team from Blue Watch Temple finished in 16th.

All teams will now be sharing their skills and experiences with crews across AF&RS to ensure they can provide the best service to members of the public.