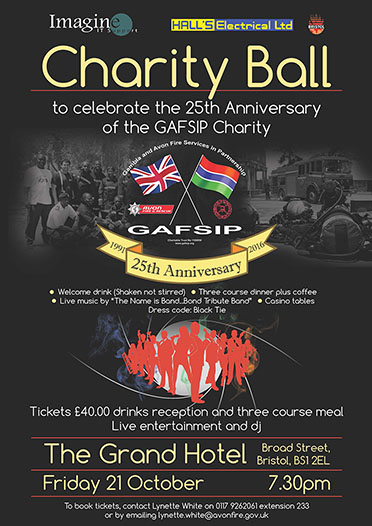 Avon Fire & Rescue Service (AF&RS) is to hold a charity ball to mark the 25th anniversary of The Gambia and Avon Fire Services in Partnership (GAFSIP), a charity set up to support the Gambia Fire and Rescue Service.

The black-tie event will be at the Grand Hotel, Broad Street, Bristol on Friday 21 October. A drinks reception, three course meal and live entertainment will be provided. Tickets are £40.00 each.

GAFSIP was formed in 1991 when former AF&RS Chief Fire Officer Dave Hutchings was on holiday in The Gambia. He witnessed a road traffic collision in which a number of people died due to a lack of fire cover in the country.

Dave was so moved by the tragedy that on his return to Avon he sought the support of Avon Fire Authority, to raise funds and send equipment no longer being used in Avon to The Gambia.

Avon Fire & Rescue Service Chief Fire Officer and GAFSIP Trustee, Kevin Pearson, said: “I am very proud of the achievements we have made through GAFSIP over the last 25 years. We have really made a difference to the lives of those living and working in The Gambia.

“Our work in The Gambia has only been possible through the generosity of our supporters and together we have been able to make a real difference to a nation and its people by providing a fire and rescue service.

“We look forward to welcoming guests to this special evening where we recognise the work of many individuals, groups and partner organisations and hopefully raise funds to support future work.”

To book tickets, contact Lynette White on 0117 926 2061 extension 233 or email This email address is being protected from spambots. You need JavaScript enabled to view it.