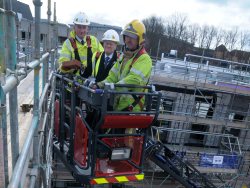 An important milestone in the construction of the new Temple Fire Station was marked during a ‘topping out’ ceremony today.

The Chairman of Avon Fire Authority, Councillor Peter Abraham, celebrated the traditional rite as the building reaches its highest point.

Contractors Willmott Dixon began construction last July on the new fire station in the centre of Bristol. Part of the existing station at Temple Back was demolished to make way for a new three storey building which will occupy one side of the almost two acre site.

The station will be home to two fire appliances and a turntable ladder, as well as the Service’s rope rescue team. Eleven firefighters will crew the station around the clock ensuring exactly the same level of cover as the existing station.

Chairman of Avon Fire Authority, Councillor Peter Abraham, said: “It has been fantastic to watch this building take shape and reach an important milestone in a project which will provide the centre of Bristol with a fantastic new fire station.

“We have been able to design the building from scratch which has allowed us to meet the needs of this modern service, in a smaller building that will be considerably more efficient to run. We are committed to ensuring the same level of fire cover we currently provide in the city centre and this new station will serve the community well for many years.”

Temple Back Fire Station was built in 1973 and is also home to Avon Fire & Rescue Service’s (AF&RS) Headquarters function. In 2013 the cost of maintaining the building over the next 10 years was estimated at £9 million, prompting AF&RS to explore alternative options in order to reduce overheads.

By rebuilding the new fire station on a smaller footprint AF&RS intends to release the remainder of the current fire station and Headquarters site for redevelopment.

Work is also underway to explore the opportunity to relocate the Headquarters function to the site of Avon and Somerset Constabulary’s Headquarters at Portishead.

The redevelopment of Temple Fire Station is part of the Service’s cost saving ‘Investing for the Future’ programme. The works have already seen the extension of Kingswood Fire Station, which was merged with the nearby Speedwell Fire Station last year.

A new fire station at Hicks Gate is due to open in the Spring which will take over fire cover in the areas previously served by Brislington and Keynsham fire stations.

Chief Fire Officer Kevin Pearson said: “We have embarked on an ambitious programme of works which will lead to significant savings to the public, but importantly with no reduction in the level of emergency cover we provide.”

The new Temple Fire Station is expected to open in Summer 2016.

For more information on the Investing for the Future project click here.

Feedback can be submitted by email to This email address is being protected from spambots. You need JavaScript enabled to view it. or in writing to Avon Fire & Rescue Service Headquarters, Temple Back, Bristol, BS1 6EU. 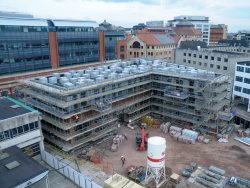 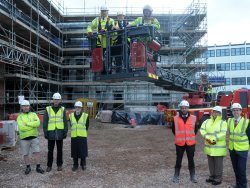