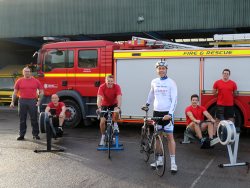 A group of firefighters from Avon Fire & Rescue Service (AF&RS) have gone beyond their original target in a fundraising initiative for the Movember Foundation.

Instead of joining the thousands of people across the country growing facial hair throughout the month of November, the team from Red Watch at Avonmouth Fire Station took on a gruelling fitness challenge.

Over the 30 days the ten-strong team used running, cycling, rowing and step machines to cover the distance between Bristol and the North Pole in the Fire to Ice Challenge. Their target was 2,679 miles but by the end of the month they had clocked up 4,020 miles.

Watch Manager Andy Perry, said: “We wanted to do something to support men’s cancer charities through Movember. We are unable to grow facial hair because it prevents the seal on our breathing apparatus masks from working properly, so we came up with this idea instead.”

Firefighter Mike Collin, who was one of the team, said: “This was a really tough challenge as we had to continue throughout the month with no rest days to ensure we met the target. There are some very tired bodies around at the moment, but some of the team have even dropped a uniform size!”

When all sponsorship and donations have been collected, the challenge is expected to have raised over £600 for the Movember Foundation, which aims to raise money to help those suffering from prostate and testicular cancer, as well as poor mental health and physical inactivity.

It’s not too late to donate so to find out more about the team and their challenge visit http://moteam.co/fire-to-ice. To donate visit www.justgiving.com/bristol2northpolein30days or text FICE99 to 70070.