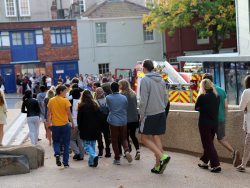 Firefighters from Avon Fire & Rescue Service (AF&RS) gave students an early wake-up call to highlight the importance of evacuating their halls of residence when a fire alarm sounds.

AF&RS has teamed up with student accommodation providers, Unite Students, for an exercise today (Thursday 22 October).

At 09.00hrs students living in the Orchard Heights halls of residence were alerted by a fire alarm and once clear of the building were given information and advice on the importance of ensuring they take all fire drills and activations seriously.

Firefighters used the opportunity to speak to the young people about the importance of fire safety measures, including taking care when cooking, keeping fire doors closed and not setting off the fire alarm unnecessarily. The exercise comes the week after a fire, which was caused by an unattended pan of oil, devastated students halls in Bristol.

Group Manager for Risk Reduction, Matt Peskett, said: “The aim of the exercise was to highlight to students the importance of fire safety. We know students can sometimes be complacent on hearing a fire alarm, but the incident on Colston Street was a dramatic reminder that fires can happen anywhere.

“The alarms activated allowing all the students inside to safely evacuate and staff to follow their well-managed fire evacuation plan. Although the building was badly damaged the presence of the alarms undoubtedly saved lives that day. Fortunately, everyone was accounted for and no one was hurt.

“The fire in Colston Street started accidentally after a pan of oil was left on a hob. We want to make sure that all students living in the city are safe and they take the necessary steps to ensure they reduce the risk of a fire starting in the first place, but also to make sure they know that when the fire alarm goes off, they need to leave the building immediately.”

Unite Students Area Manager Richard Brenner said: “I’m very proud that our staff at Orchard Heights offered immediate support and shelter to University of Bristol students left temporarily homeless in the aftermath of the Colston Street fire. That fire served as a very unfortunate reminder of the need for constant vigilance.

“There is literally nothing more important to Unite than the safety of our students, and we wholeheartedly support this very timely fire drill.”

Since the start of the new university term, AF&RS has been working with the universities in order to highlight fire safety issues.

The campaign has focused on encouraging students to ensure they don’t leave cooking unattended. Kitchen fires account for more than 50% of all accidental house fires.

Group Manager Peskett continued: “There are lots of ways to prevent a fire from starting and we would urge everyone, including the student population, to follow our advice.”

What to do if a pan catches fire