Fire in student accommodation in Bristol was started accidentally 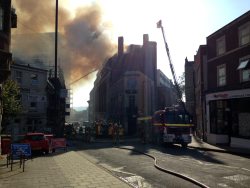 Following a thorough investigation into the cause of a fire in student accommodation in Colston Street, Bristol, on Monday 12 October 2015, Avon Fire & Rescue Service (AF&RS) can confirm the fire started accidentally.

Firefighters were called at 13.03hrs to reports of a serious fire. On arrival crews found the blaze affecting the fifth floor and roof space of the building.

At the height of the fire more than 40 firefighters worked to bring the blaze under control using two turntable ladders and a number of other appliances and equipment.

An investigation into the cause of the fire determined that the fire started accidentally after a pan of oil was left unattended in a kitchen area.

Station Manager Steve Quinton, who carried out the fire investigation, said: “We are satisfied that the cause of this fire was accidental after a pan of oil caught fire in a kitchen area.

“Whilst this was undoubtedly a dramatic and extremely traumatic incident for those involved and affected, thankfully no one was injured. The alarms activated allowing all the students inside to safely evacuate and staff to follow their well-managed fire evacuation plan. Although the building was badly damaged the presence of the alarms undoubtedly saved lives that day.

“The firefighting techniques used to bring the blaze under control, combined with the construction of the building and the evacuation procedures in place helped prevent the fire from spreading to other floors.”

Lynn Robinson, Deputy Registrar at the University of Bristol, said: "Although the fire has caused a huge amount of damage, our overriding concern was for the safety of our students and we’re very thankful that no one was injured. We were able to rehouse everyone quickly and continue to support them after what was undoubtedly a traumatic experience.

“We are very grateful to Avon Fire & Rescue Service for their hard work and will continue to work closely with them to ensure students are educated about fire safety issues.”

Since the start of the new university term, AF&RS has been working with the universities in order to highlight fire safety issues.

The campaign has focused on encouraging students to ensure they don’t leave cooking unattended. Kitchen fires account for more than 50% of all accidental house fires.

Group Manager Matt Peskett said: “There are lots of ways to prevent a fire from starting and we would urge everyone, including the student population, to follow our advice.”

What to do if a pan catches fire