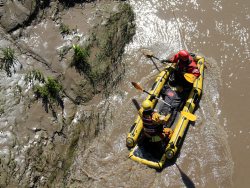 Firefighters from two Bristol fire stations have rescued ‘casualties’ from the River Avon as part of an exercise to test their skills and protocols.

On Tuesday 21 April crews from Temple and Bedminster fire stations took part in a simulated rescue exercise involving two ‘casualties’ in the water underneath the railway bridge in Victor Street, Bristol.

Firefighters were called to reports of two dog walkers who had entered the water to rescue their dogs close to the Bristol Dogs Home.

Station Manager Rob Seaman said: “Avon Fire & Rescue Service attends on average between 10 and 15 water rescues in the Bristol area every year so it is vital that crews have the skills and knowledge needed to ensure that when they are called upon, they can deal with any incident quickly and effectively.

“The exercise was designed to ensure those attending can practise their water rescue skills and use the equipment we have to assist us in the event of a real emergency.

“We know that the water provides a popular leisure venue for many people in the city so we will be using this exercise to highlight the importance of staying safe near water.

“At this time of year the water may look very inviting but will be extremely cold if you fall in. The cold will soon affect even the strongest swimmer and if you have been drinking alcohol you will quickly be affected by hypothermia or worse.

“If you are out on or by the water, especially at night, make sure you stay with friends and avoid using routes near to stretches of water to get home. If you see someone in the water, dial 999 and ask for the fire and rescue service.”

Firefighters also trialled a new rescue boat which is on loan to AF&RS from MFC Survival. 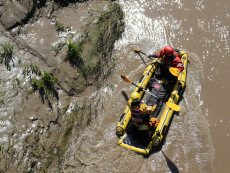 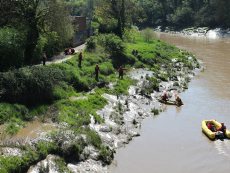 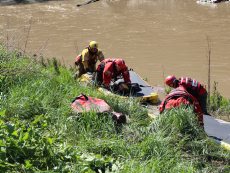