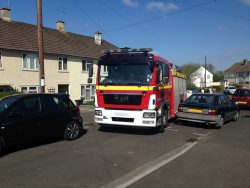 Avon Fire & Rescue Service (AF&RS) carried out a joint parking operation with Avon and Somerset Police and the council in Southmead, following complaints from residents.

A police van and a fire engine were driven around some of the streets where problem parking has been reported to test whether they could get the emergency vehicles down the road.

Illegal and inconsiderate parking is an ongoing issue in many of the residential streets.

People living in the area gave positive feedback to the operation, in which a total of 17 tickets were issued between police and council with a number of warning leaflets being handed out by AF&RS.

Watch Manager Nathan Jones from AF&RS said: “People fail to appreciate the width of fire appliances – a van or a car will be able to proceed through but we will have difficulty and obviously it will cause a delay and for an emergency situation that is a problem.”

Another issue that faces the fire and rescue service is that even if we can get our vehicles along a road, quite often, streets where cars are parked on both sides of the roads will restrict us from being able to open the doors and exit the vehicle while wearing kit.

Inspector Mark Runacres said: "We will continue to work with our partners to deal with the ongoing issues of illegal and inconsiderate parking on the beat.

"Residents tell us that this is an important issue and likewise, as we saw during today’s multi-agency operation, it is important for all emergency services in ensuring we are able to carry out our day-to-day duties.

"We had a good response to today’s operation, not only from the fire service, council and other partners but also from residents in the streets affected who approached us and gave positive feedback for our continued action.

"Our approach is always to be proportionate, fair and where applicable educate people as to the issue to avoid it in future. Where necessary, we will also issue fines or tow away vehicles if they obstruct an emergency vehicle from getting to an emergency call."