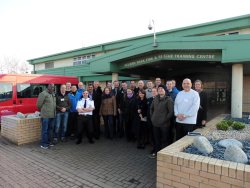 Delegates from around the world have gathered in Bristol to discuss the coordination of the response to international disasters like earthquakes, flooding and volcanic eruptions.

The 18 delegates looked at the On Site Operation and Co-ordination (OSOCC) concept which is set up to help local authorities in a country affected by a disaster to co-ordinate relief. It is established as soon as possible by the first arriving international urban search and rescue team or United Nations Disaster Assessment and Co-ordination team.

Avon Fire & Rescue Service Assistant Chief Fire Officer Rob Davis, who is also a team leader of the SARAID charity, said: “In recent years fire and rescue services and SARAID have been called to assist with emergencies all over the world including earthquakes, flooding and landslides. It is imperative that we are prepared and can respond effectively, so this conference is vital for planning our response.

“Delegates have been discussing responses to disasters, including the earthquakes in Haiti and Japan, sharing best practice, exploring the co-ordination of relief operations and discussing tools and techniques to ensure that teams involved in rescue and humanitarian response can work effectively and efficiently in the event of a disaster.”

It’s the second time that a conference of this nature has been hosted by a UK fire and rescue service. It took place from Monday 16 to Friday 20 March.

Peter Muller, Humanitarian Affairs Officer for the United Nations Office for the Co-ordination of Humanitarian Affairs (UNOCHA), said: “This training is for the trainers that work with various networks, for example Urban Search and Rescue (USAR) teams around the world. We have delegates from Belarus, Finland, Poland and Jordan attending, as well as from other countries. We have developed a new course for OSOCC managers to roll out in their countries and regions so that in the event of a disaster they are ready to respond and work alongside teams from across the world effectively.”