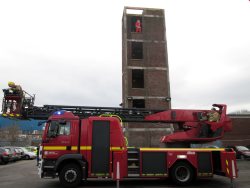 On Sunday 14 December crews from Blue Watch at Bedminster Fire Station hosted a Christmas party with Father Christmas arriving via the training tower and needing help to get down.

Firefighters used a Turntable Ladder to ‘rescue’ Father Christmas and took him to meet the children.

As well as the chance to meet Santa, the children were entertained by a children’s entertainer and given the chnace to find out more about life in the fire and rescue service.

AF&S Group Manager for Community Safety, Matt Peskett, said: “With Christmas around the corner, this was a great opportunity for us to spread the fire safety message as well as put on a treat for the young people.

“While they enjoyed the fun and entertainment, firefighters spoke to their parents and carers about the importance of working smoke alarms and escape routes.

“Just two or three breaths of toxic smoke is enough to make someone lose consciousness and a smoke alarm could also assist your family’s escape by activating at the first sign of fire.

“We also asked parents to make sure everyone in the house knows how to get out safely in the event of a fire.”

The Rainbow Trust provides emotional and practical support to hundreds of families who have a seriously ill child.

Asda Bedminster has supplied selection boxes for the children and Sainsbury’s, Winterstoke Road, Ashton, has provided food for the party.