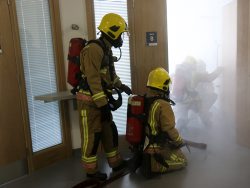 Firefighters turned up at Southmead Hospital’s new Brunel building as part of an exercise to simulate a fire in the lead-up to its opening.

Avon Fire & Rescue Service worked with North Bristol NHS Trust to plan the exercise which tested procedures for both partners before the first patients move in to the building in May.

The Brunel building was handed over to the hospital trust by developers Carillion last month and work is now ongoing to equip it and prepare staff for working inside.

The new building has been designed to minimise the spread of smoke and fire from one area to another with a combination of fire doors, fire curtains, alarms and a sprinkler system. The fire simulation and evacuation exercise was a chance to test these elements of the building and the procedures of the fire service and the NHS trust.

One of the patient rooms in the new hospital was filled with synthetic smoke for the exercise and about 60 members of North Bristol NHS Trust staff took part in the evacuation. Firefighters from Southmead, Patchway, Avonmouth, Kingswood and Speedwell fire stations attended the Brunel building.

The fire crews took control of the hospital’s lifts as they would in an emergency, went up to the wards and identified the location of the simulated fire. Firefighters wearing breathing apparatus searched the ward and dealt with the fire.

North Bristol NHS Trust fire safety officer, Robin Manners, said: “We wanted to test the procedures that are built in to the Brunel building in terms of the fire prevention to make sure that everything was working. The priority was working as teams so that we were actually seeing the interaction between Carillion Services Ltd, North Bristol NHS Trust’s fire team and the fire service. It was a dry run of what would happen if there was a fire in the building.

“I think it was very successful and a lot of enthusiasm was shown by all the players. We are very grateful to all the staff that took part because they were all volunteers and did a great job.

“This means we can reassure the public that the building is safe in terms of fire, that all our procedures worked and that we are taking any steps that need to be taken form the exercise.”

Watch Manager, Sean Spearing, who organised the exercise, said: “A brand new hospital on our doorstep provided us with an ideal opportunity to familiarise ourselves with the building and test our procedures and protocols in the event of a real fire or other emergency.

“Synthetic smoke was used to ensure the exercise took place in realistic conditions with crews searching the premises and assisting the NHS staff with any evacuations.

“The exercise went really well and I would like to thank all those involved in the planning and delivery. Without the hard work of those individuals it may not have been possible to get the most out of this opportunity. This exercise will ensure that staff and patients will be safe should there be an emergency on the site.”

To see photos from the exercise visit http://bit.ly/1gaQ24r.