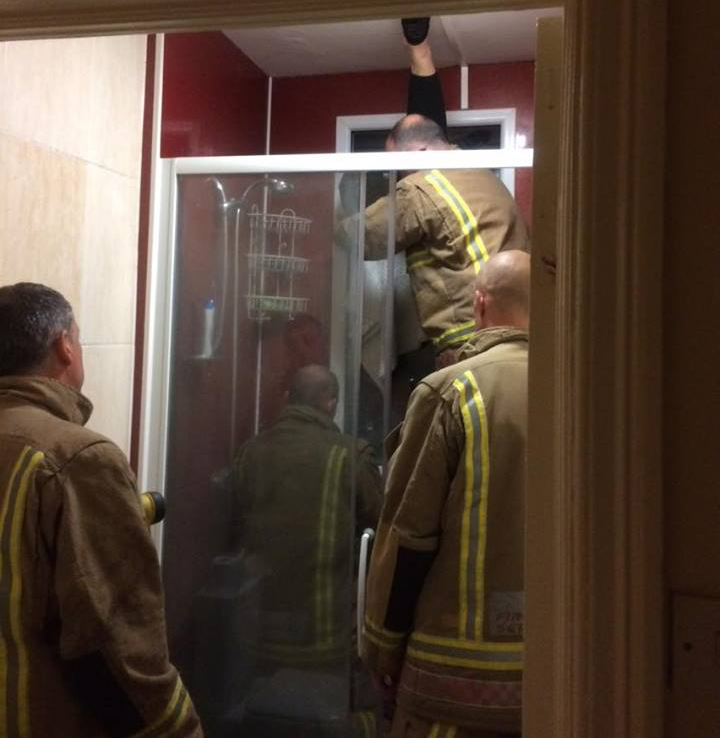 Crews were called to rescue a lady who had become stuck between internal and external glazing - but the circumstances leading up to the call-out have now become an internet hit.

Two crews from Green Watch at Temple Fire Station were called to the incident, among them was Firefighter Chris Crothers.

He explained:  “When we arrived we weren’t really sure what to expect as the only information we had was that a lady had become trapped in a window. Although she wasn’t hurt she was well and truly stuck, with her face squashed against the glass.

“We often find when people are stuck they can start to panic very quickly so we do our best to keep them calm until we can free them.

“I started chatting to her and she told the whole story about how she had become stuck. She was quite open about the whole thing – I think by then she had gone passed the point of embarrassment!

“She was trapped in a void between internal and external glazing, but her weight was against the pane of glass so we had to be really careful during the rescue.

“To free her we removed beading around the edge of the glazing and then made sure we were supporting her as we carefully took out the pane of glass. Once the glass was out we gently lowered her to her feet.

“Although she had been upside down for some time, with the company of a few spiders, she was absolutely fine and just pleased to be free.

“We see strange things all the time, but this certainly has to be one of the strangest – purely because of why she was stuck.

“We told them they would be telling the story for the rest of their lives but I don’t think any of us expected the story to get the interest it has."

Following the rescue, Liam Smyth who lives at the house, set up a GoFundMe page to raise money to repair the damaged window. The page quickly became an internet hit https://www.gofundme.com/9wvxt9-replacement-window

Firefighter Crothers added: “It looks like Liam has now raised more than enough money to repair the window so we’re delighted to hear that The Fire Fighters’ Charity will also benefit from the extra money raised.”

The Fire Fighters Charity provides a range of services that enhance quality of life for serving and retired fire service personnel and their families.