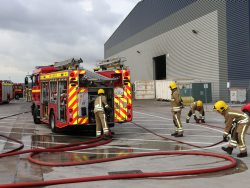 There are 11 fire engines and support vehicles and more than 55 firefighters on the scene dealing with the incident. Firefighters in breathing apparatus are using water jets to bring the fire under control.

Members of the public living or working near the area are asked to close their doors and windows due to the smoke plume.

The fire is now out and the Service's attendance at the scene has been reduced, however a number of crews will remain at the site for some time damping down. An investigation into the cause of the fire will take place this morning.

Fire crews have been on scene to assist with the investigation into the cause of the fire, which found it started accidentally as a result of a fault with the processing system.