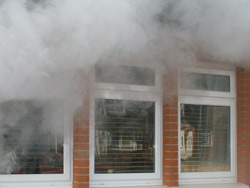 Crews from Bath, Hicks Gate and Kingswood were called to reports of a flat fire at 12:33.

On arrival, crews found a fire in a third floor flat of a three storey building.

The occupant had been rescued prior to the Service's arrival, and first aid was administered by fire crews.

The incident was determined to have been caused by accidental ignition.

Roadways were closed for a time in central Bath to allow for crews' arrival.