AF&RS receives plaque in memory of the Royal Observer Corps 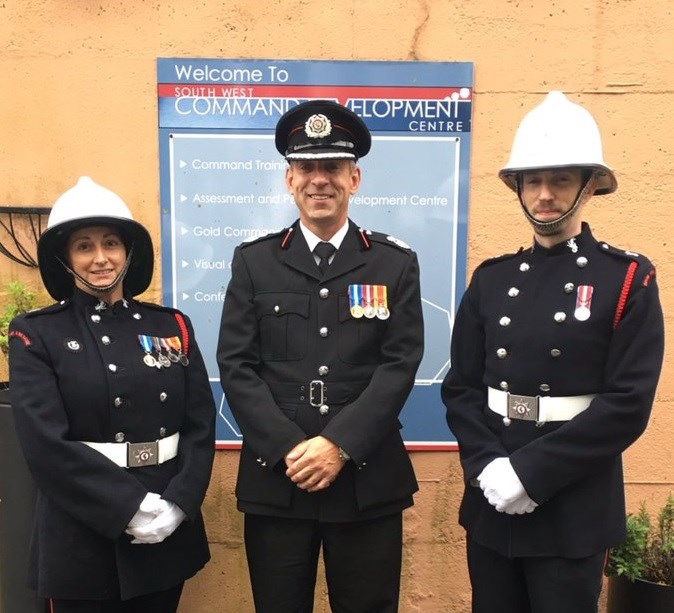 Staff at Avon Fire & Rescue Service (AF&RS) have received a new plaque at the South West Command Development Centre to mark the site’s opening 60 years ago and the Royal Observer Corps who served there.

Around 40 former Observers and their families were present at the ceremony, along with staff from AF&RS and its Drill Squad.

Hung and displayed in what was the Operation Room and Bunker, the plaque remembers all those who previously served on the site.

Simon Shilton, Assistant Chief Fire Officer for AF&RS, said: “It is a privilege to receive this plaque and remember all those who served at the site from 1959 to 1991.

“Those who worked here over the years tracking aircraft and monitoring other challenges made a huge difference to people living in the UK.

“We are privileged to now be at the site protecting the community of Avon as those did for so many years before us.

“We will always respect those who came before us and this is a fitting way of remembering them forever.”

Formed in 1925 to collect and report movement of hostile and friendly aircraft, the Observer Corps rapidly developed an efficient network of monitoring posts. By 1940 with radar in its infancy the Corps became the eyes and ears for the Royal Air Force.

In 1955, The Royal Observer Corps role to report tracking aircraft (using the minimum of instrumentation) changed to the detection of Nuclear Explosions and monitoring of Radioactive “Fall-out” with many sophisticated instruments.

New “Protected” Posts were built below ground level and in 1959 the 12 Group Headquarters moved to the semi-sunk building at Lansdown officially opened by Airey Neave, Under Secretary of State for Air.

The Corps remained at the site monitoring the approach of ‘fall-out’ until the threat lessened, the Corps was stood down and the site was closed on Sept 30th, 1991.

Jenny Morris, Ex Observer Commander in the Royal Observer Corps, added: “Today Avon Fire & Rescue has made us very welcome. On behalf of all the members of 12 Group ROCA we say a huge thank you for arranging such a momentous day that we have all enjoyed.

“It is very special for us to share with you this opportunity to remember and pay tribute to all who served at this site in the past and to your staff who continue to work here to protect and keep our communities safe.”

For more on the Royal Observer Corp, visit www.roc-heritage.co.uk